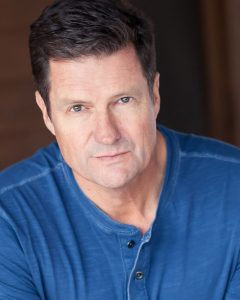 When I was about 8 years old, my grandmother me borrow her super 8 film camera. It was at that moment that it all started. I began to film my dog, my brothers, my friends and just about anything with that camera. I would usually make my two younger brothers the stars of my productions. I made them do all kinds of crazy things. However, I was only able to film for a couple of minutes before the small roll of film in the camera would run out. Then I would have to take the film to the local drug store and send the film off to get it developed. I think the whole process of development took about 3 or 4 weeks, but it seemed like it took about 6 months or more. Then I would watch my movie back on my grandmother’s projector, praying that the bulb in the projector would not go out before the end of my movie. During this time, I loved to go to movies. The first movie that I remember seeing on the big screen was “True Grit” with John Wayne. That movie made me want to be an actor. I have probably seen that movie over a hundred times since I first saw it.

My love for film and acting grew as I got older. I was scared to death to do any acting in high school. However, in college, I began to get my nerve up. During my freshman year at the University of Arkansas in Fayetteville, AR, I worked as an extra on “The Blue and the Gray,” a TV mini-series that was being filmed around town. While working on this production, I met Stacy Keach. He told me that I needed to go to New York or LA if acting was what I really wanted to do. Before taking his advice, I decided to move to Dallas, TX with a couple of college friends. I thought that Texas may be easier for me to break into acting. I studied acting at the Film Actors Lab with Lou Diamond Phillips and Adam Roarke for about 5 years. The lab was an incredible place for young actors to learn and polish their craft. In 1988, I took an audition workshop with Doris Sabbath at Kim Dawson studios in Dallas. Doris was a casting director from Los Angeles. She was the main casting director for “Days of Our Lives.” After reading a scene for her in the workshop, she gave me her card and told me to call her when I moved to LA. Well, I moved the next week. She came through with what she promised and she cast me in several different roles on that show for the next several years. Through that work, I got an agent in LA and began to work on various TV, Film and commercial projects.

In 1994, I met a girl in Burbank that was from Arkansas. She was beautiful and from my home state, so I could not let that one get away. Before I knew it, we were married with a baby on the way. Los Angeles can be a tough place to raise a family, so in 1998, we moved back home to Arkansas. I got out of the business for almost 10 years to focus on my family.

In 2007, I decided to get back into the business and keep chasing my dream. My family has been so supportive. I have three wonderful kids and a great wife that is my best friend. My wife has helped me so much with acting. She has always encouraged me and she keeps me grounded. To be honest with you, it can be easy in this business to lose sight of what is important and you can become self-absorbed really quick. My wife has been great at pulling me back in and pointing me towards the right direction. I will mention more about that direction below. My mom and dad have also been there for us through the good and the bad. My parents are probably my number one fans. When I was broke in LA and living on peanut butter, I could always count on them to bail me out. They somehow managed to give so generously even when they had nothing to give. They always put their kids first. My dad literally would give me the shirt off his back. Thank God for parents like that and for my family.

I want to encourage anyone that might be chasing a dream that seems difficult or unattainable. Don’t give up. Just keep on pushing and keep trying to do your best, no matter what comes you. I have been able to book many TV and Film projects over the years. But for every YES I get, just know that it took a lot of NO’s to get there. I have been told NO over 1000 times on auditions, but I keep going. There may be people out there that don’t believe in you and that’s ok. Just believe in yourself and work hard each day at chasing that dream. One day, you will get there. Never, never, never, never, give up.

One final note. I mentioned above about my wife pulling me back in the right direction. That right direction for me is a direction aimed at God. I want to be transparent with all of you right now. There have been many times when I have had my doubts about God. There have been a whole lot of times when I have not stood up for God like I should have. My wife and I have been through just about everything that can break up a marriage. When you see first hand, how God can heal a broken marriage, addictions, sickness, major financial problems, and many other problems, it strengthens your faith. I know deep in my soul that God was responsible for getting my family through some terrible and tough times. It is because of him, that I have anything at all. I owe him so much and even after he has done so much for me, even to this day, I have to be careful not to let the enemy pull me off track, away from the right direction. We live in a tough world today and for me, the only way I am going to make it through this life is to put my faith and trust in Jesus Christ my Lord and Savior. I wish I could tell you that doing that is easy, but it is tough to do and some days I fail, but the next day I get back up and point my direction toward the cross. Please don’t think I am preaching, I am just being honest and I want to publicly thank God right now for all he has done for me and my family. I encourage you to point your direction toward the cross.

Well, this is my story. See ya on the set.

Thanks for your interest,